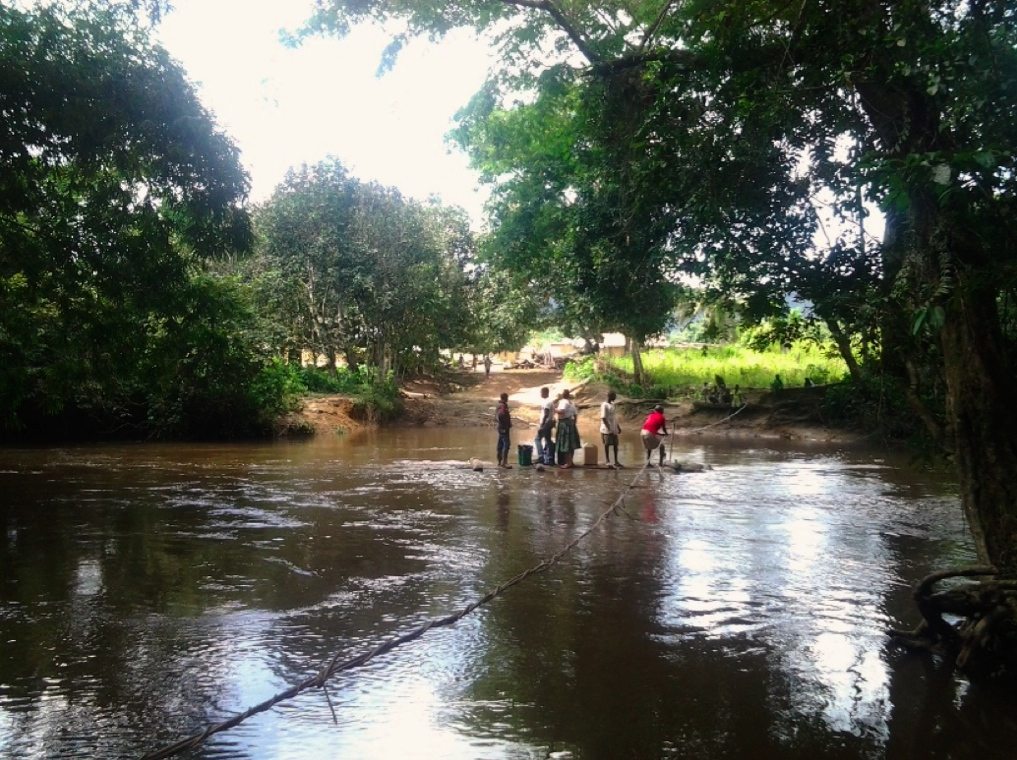 This blog series looks at how people in Guinea, Sierra Leone and Liberia are seeing their lives and livelihoods profoundly affected by Ebola. This story is contributed by Thomas Barlue, a Young Peace Ambassador, One Young World Ambassador, and Community Solutions Fellow in Liberia. Considering Peace Child International’s Be the Change Academies function in these countries, we need your support to assist our staff on the ground – please help us provide the Ebola prevention materials they need. Thank you.

By 2:30 PM, after a six-hour journey, our team arrived at the riverside, a stone’s throw from Klehn’s Town. Every member of the team appeared exhausted from bouncing around for hours on pot holes as the car sped along. Villagers came to the river crossing as the man who controls the traditionally-made Wood Fairy pulled his rope towards us. The town has over 200 houses with over 1000 inhabitants, according to authorities there.

Two confirmed cases of Ebola had been reported in Klehn’s Town in August and September, but both people died at home before authorities could arrive. Now there are up to 12 suspected cases.

As we entered the town, women and children scrambled to greet us. Everyone knew we were there to talk to them about Ebola because they saw the Ebola buckets in our hands. Before we had arrived, a group came and left one bucket at the riverside for the villagers to wash their hands. As if that was not enough, as we walked to the Chief’s office, villagers young and old surrounded us, prepared with serious questions and concerns about the epidemic. Some appeared frustrated while others simply needed more clarity. Key among these questions were: is the government is doing anything to end Ebola in Liberia, apart from just encouraging hand-washing? Which of the bush meats we should not eat, and why are we only treating humans if the animals are the carrier of Ebola? Will we ever eat bush meat again?

Two months earlier, while on an assessment tour, I was touched by some stories. Others I could not bear. The situation taking place in Klehn’s Town was serious by then, as some Ebola victims had just migrated from Margibi County, walking through the forest and crossing over to this almost isolated village. Klehn’s Town, like other villages in Rural Montserrado, Nyeamah (Gomoshu) in lower Careysburg, are almost completely isolated and surrounded by treacherous terrain. The migration of suspected Ebola victims is one of the key causes of Ebola cases in these rural communities, because in most cases, when family members are sick, they prefer to go to native doctors or go to other family members in the interior for traditional medications. The increased stigma, ineffective response and poor contact-tracing efforts have complicated the effective surveillance of Ebola victims.

Team members of Youth Crime Watch of Liberia’s Ebola Emergency Liberia campaign, as part of the Early Warning Working group, led a three-day Awareness, Sensitization campaign and distributed Health Kits across ten communities in Grand Bassa. A similar exercise was held for two days in rural Montserrado for ten communities as well. Materials were acquired with support from Humanity United. On the way to Klehn’s Town, our team covered three other towns and villages, including Jacob Miller Town, Compound #3 and St. John.

In Jacob Miller Town, residents – men, women and children – came running to us as we entered the town. They gathered at the Tribal Chief’s Hut. Mr. James Dolo, Tribal Chief for Leegbhn Section, was excited to welcome us and started to tell us about his communities. Jacob Miller itself is close to the main road and a small town, but the Chief here has more than 20 villages under his jurisdiction. These villages can only be accessed by motorbike or on foot. The town Chief said,

I only have this mineral bottle. I put pieces of iron soap in it with water for people to wash their hands. We are here in this town, on the road, we don’t have bucket or Clorox to wash our hand. Just think about our people in the bush. 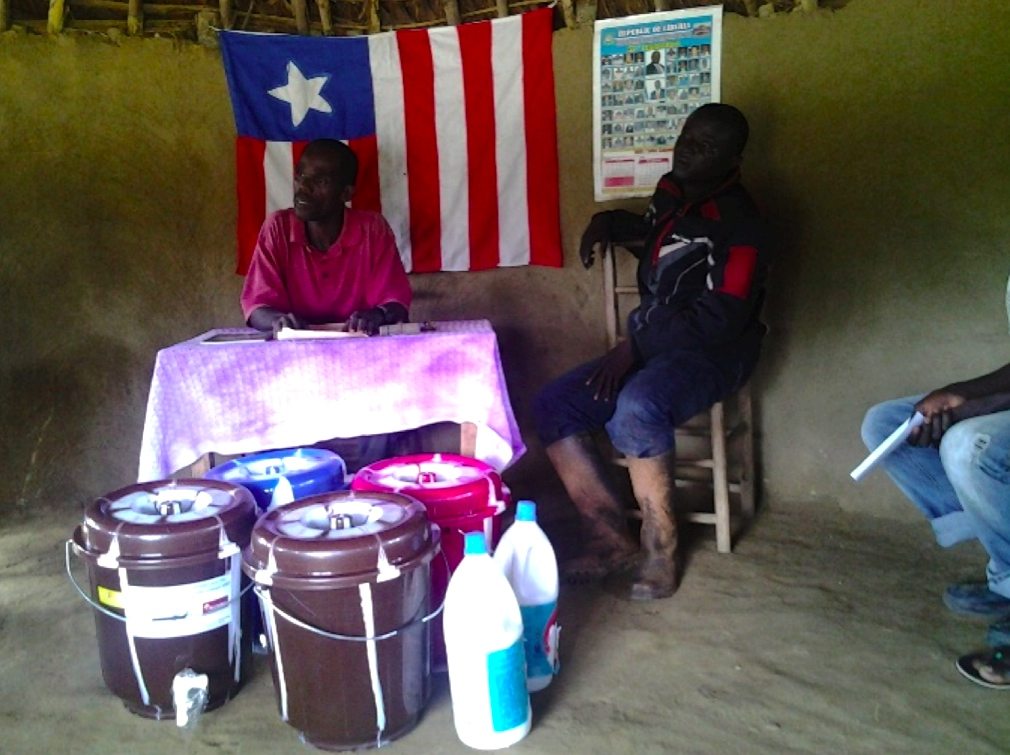 Both Klehn’s and Jacob Miller Town don’t have easy access to communication, so you cannot call anybody with mobile phones there. Only residents can make a call because they climb trees to find signal. There is no drug store in Klehn’s Town though there is a government clinic few hours away. The next nearest access to medication – Compound #3 – is about two hours by car, the equivalent of days of walking.

There had been an organization of local Task Forces already since my last assessment, but one of the just-trained Task Force members for the communities around Klehn’s Town complained that he has not been able to do his job. “We just receive the training, but I don’t know how they expect us to go around in the villages to talk to people,” he complained. He said that the training he just received is the second time he has received such training about Ebola, “but they just tell us to go and educate our people….I don’t know how!” he added. It is very rare to see commercial vehicles except for the few that travel only during market days in particular through major towns. Travelers have to try their luck at waiting or walk to the nearest town to catch a motorbike or vehicle on a market day.

These rural communities border other affected counties, like Rivercess, Margibi and Bong – all Ebola-hit counties. Authorities in Buchanan sent medical teams to Klehn’s town to train residents on how to bury their dead, but in any reverse case, residents have to wait for days again in order for a response to come from Buchanan City. The nearest big town along the way, about one to two hours from Klehn’s Town, is Compound #3, which has access to both internet and telephones, but no Ebola Treatment Center and one Quarantine Center, which is currently closed for lack of resources after recently discharging two suspected patients. Therefore, there is currently no capacity for rapid response in district #3. There is a local task force, with whom we met at the Youth Center together with the district health technician and other youth leaders, and they all stressed a willingness to get involved but noted serious challenges, like the lack of logistical support and capacity to carry out planned activities. Even the Youth Center – which is still open to young people and used for other meetings during this Ebola era – did not have a bucket or any other sanitizing kit for visitors during our visit.

In most communities, local authorities are making efforts to mobilize local sensitization Task Forces, some by the central government. However, setting up a Task Force is one thing – making it operational is another. This means having the capacity to do what is required. It occurs to me that these local structures are still looking on the road for donors to help them carry out community-driven awareness. Some were even formed because they saw it as a way of employment rather than a social obligation. Thus, until the government and other international agencies are able to fully capacitate these local structures, it will make no difference at all whether there was a Task Force or not. Recently, the main county Task Force in Buchanan city received another harsh warning as citizens demonstrated for the removal of the County Superintendent, who is playing host to the county Task Force and administering Ebola Relief Funds. Demonstrators are citing corruption and misappropriation of resources. The previous Task Force Coordinator resigned because of similar reasons.

The Center for Disease Control warned earlier that without additional interventions or changes in community behavior, by January 20, 2015 there will be a total of approximately 550,000 Ebola cases in Liberia and Sierra Leone; 1.4 million if corrections for underreporting are made.

To date, according to the CDC’s updated profile of October 5 2014, cases in Liberia are currently doubling every 15 to 20 days, and those in Sierra Leone and Guinea are doubling every 30 to 40 days. Liberia along has accounted for over 3,924 cases of Ebola with total deaths reaching 2,210. Almost all victims coming from remote towns and villages either died before the authorities could arrive or died on the way to an Ebola Treatment Unit. The President of Liberia, on October 14, called for more assistance from world leaders in a letter to the world. “This fight requires a commitment from every nation that has the capacity to help, whether that is with emergency funds, medical supplies or clinical expertise; the virus has been able to spread so rapidly because of the insufficient strength of the emergency, medical and military services that remain under-resourced,” she said.

As we step up response efforts in the main cities, serious community-level intervention is required to win this fight (especially in hugely-populated slum communities, isolated towns and villages). Due to the education level of our country (which has an illiteracy rate over 70%) and the remoteness of most communities, we can’t be sure how many victims have migrated from the cities to rural communities already or how well people are yielding to key messages. Also, we cannot rely on radio messages and distribution of flyers only. These efforts need to be accompanied by an aggressive community-driven door-to-door awareness, sensitization and dramatization of behaviour change campaign, particularly in affected and threatened areas. Citizens need to be talked to and have their questions answered. Ebola Treatment Units need to be decentralized and alternative medications accessible to communities need to be made available through local pharmacists and clinics.

Thomas Barlue is a Young Peace Ambassador, One Young World Ambassador, Community Solutions Fellow and committed, grass root, youth and community development advocate. He has been working and inspiring change among and for children and youth since 2004. He can be contacted Via Email: onedream.lib@gmail.com / Skype: one-dream.lib / Twitter: @teeman101. Read his other blog about Ebola: Circumstances for Change: The Era of the Deadly Ebola Virus in Liberia.