The UN and its agencies produce hundreds of books and reports, many of which are read by only a handful of people. When our young people challenged UN officers that their books were dull and unreadable, the UN folk challenged back: “OK – so YOU write them!” So we did: several of them.

The first was a Children’s State of the Planet Handbook – “all you ever wanted to know about the environment but were afraid to ask!”

The second was a children’s edition of the UN Earth Summit’s Agenda 21 – which the youth called: Rescue Mission : Planet Earth – a book that went on to sell over 500,000 copies and be translated into 23 different languages.

Many more followed – some of which are scanned and included here. The goal was always to make the information in them fun and accessible to a bright 14-year old!

These resources are enjoyed by that age group and many other age groups too (including several diplomats at the UN, who were seen to have a copy of Rescue Mission in their offices. After all it was so much easier to understand and see the mission goals in this edition than the adult original! 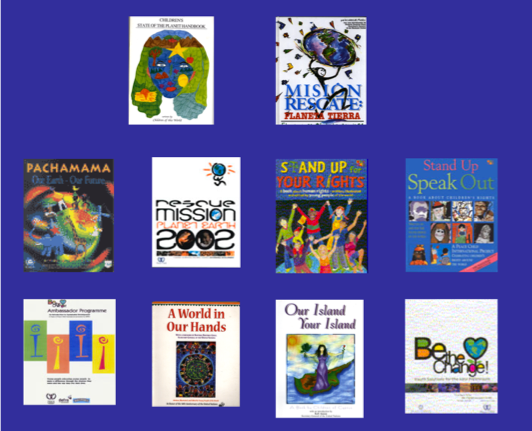