Produce your own version of the famous Peace Child Musical

Around the world, there have been over 10,000 performances of the Peace Child Musical, with each one set fifty years in the future in a peaceful and sustainable world.

The overview is that the story is told in a flashback to the present and tells what the children of today do with their lives to bring about that future world that we all want.

Each performance is different as every cast is invited to imagine that they are the young people in the story. They are encouraged to develop their own characters, write new songs, lines and sometimes whole scenes to accommodate their ideas.

Peace Child’s goal is to empower these young adults to imagine how they will change the world for the better in their lifetimes.

The new song book will contain all the music, story and lyrics from the original Peace Child the Musical, evolved so that you can put on your own production. Original creator, David Gordon has working closely with Tom Powell to put together this comprehensive song book.

The new song book will empower and inspire young people to bring about the change that they want to see in the world. 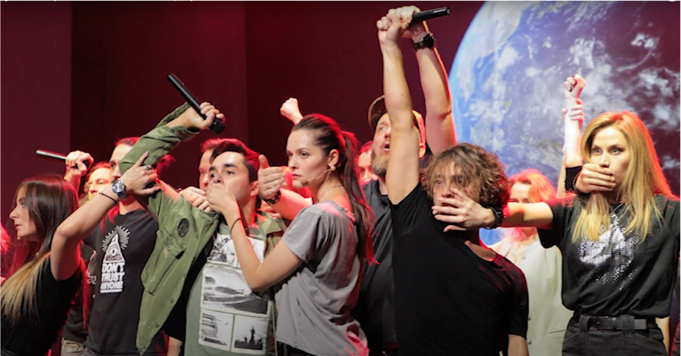 If you venture further into the background behind the Peace Child Musical, you enter a world where miracles happen.  There is a magic about this musical which many producers have remarked upon!

The first production at the Royal Albert Hall in London was the result of so many miracles that we could scarcely believe it actually happened.

The Stage Manager at the US Premiere remarked that the transformation of the chaotic dress rehearsal in the afternoon, into the triumphant performance in the evening, was “the best reason I ever had for believing there is a God!”

When we took the Musical to Moscow in 1985, Peace Child launched a series of Youth Cultural exchanges between the USA and the former USSR. Five years later the Berlin Wall came down and the Cold War was over – fulfilling the happy ending prefigured in the Peace Child Musical story.

We created a version in Central America in 1988 and just 5 months later the Escipoulas Peace Accords were signed.

In towns and cities across many countries, different versions of the Peace Child or the City at Peace story have been told on stages of school and community theatres. Easing tensions, the communities came together.

On the night of the Peace Child Musical premiere in London, the writer’s father showed him a press report about Don Richardson’s book – Peace Child. The book was about his experience as a missionary in Papua New Guinea. Richardson told that, when warring tribes made peace, they exchanged a baby to secure the peace between them. The babies grew up in the’ tribe and if, in the future, conflict threatened, the elders of the tribe sent out those children to negotiate a new peace between them. Such a child they titled a ‘Peace Child’. Richardson used this story to explain how God sent His Peace Child – Jesus Christ – to negotiate peace between Himself and human beings.

That’s great, but our Peace Child is for people of all faiths and none, so over the years, we’ve promoted our own interpretation of Richardson’s story. Peace Child the Musical works to encourage elders everywhere to follow the example of the tribal elders in Papua New Guinea and empower young people to take responsibility for negotiating peace and creating the future they want.

So be prepared for miracles as you and your young people create your own production of Peace Child. It could very well become a self-fulfilling prophecy.

The Peace Child Musical has been performed over 5,000 times in 31 countries, involving 250,000 young people

“What happens on stage really happens in life. Maybe someday one of these kids will become a politician. This experience will be carried with them. Their friends are in the Soviet Union. They’re not going to make war with their friends.”

Helping to thaw the Cold War

In 1986, Working with the US and Soviet administrations, we brought about the first cultural exchange between Soviet and American youth. As a result, Mikhail Gorbachev invited us to work with his Green Cross organisation to fight climate change.

Continually evolving to meet the needs of the next generations!