Circumstances for Change: the Era of the Deadly Ebola Virus in Liberia 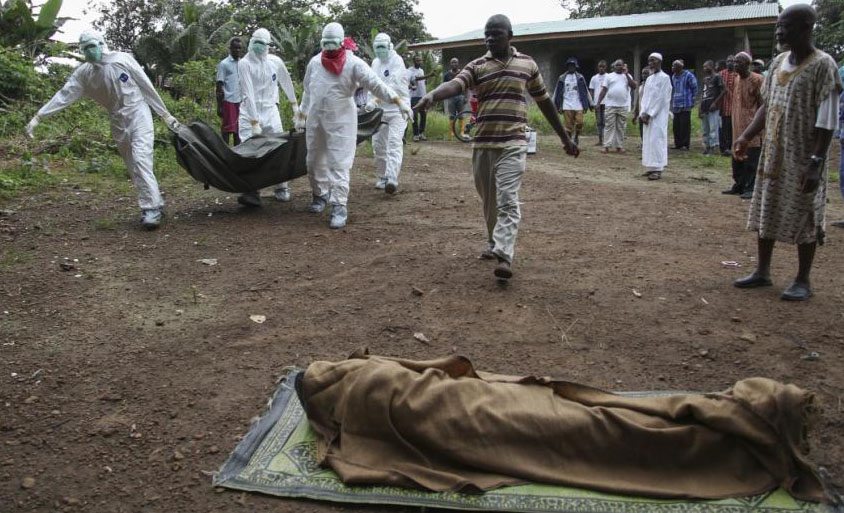 This blog series looks at how people in Guinea, Sierra Leone and Liberia are seeing their lives and livelihoods profoundly affected by Ebola. This story is contributed by Thomas Barlue, a Young Peace Ambassador, One Young World Ambassador, and Community Solutions Fellow in Liberia. Considering Peace Child International’s Be the Change Academies function in these countries, we need your support to assist our staff on the ground – please help us provide the Ebola prevention materials they need. Thank you.

As I sit to write, my memory refreshed, I look back to the recent journey traveled through rural communities of Grand Bassa and Rural Montserrado. I am still struggling to catch up on what is really happening around me. I feel like I am dreaming, but the clamor and confusions wouldn’t allow me to stay much longer – if this was a true dream, I wish I could never fall asleep again! This, unfortunately, is a reality that is currently affecting the lives of thousands already across Liberia in “the Era of the Deadly Ebola Virus”.

Ebola is an infectious and often fatal disease that results in fever and severe internal bleeding. There are no medications effective in curing the virus, but supportive hospital care can significantly increase survival.

The Ebola crisis began in a small Town in part of Lofa County, and seemingly effortlessly managed to take over some of our major and most populated cities – Monrovia and Buchanan, taking a toll on both economic and social activities as well as affecting families and destroying communities. These two counties have a combined population of 1,339,934, mostly concentrated in the main cities, which have been hit harder.

As the World Health Organization (WHO) recently predicted, Liberia would suffer more cases of infections over the coming 2 to 3 weeks, if not longer, depending on the state of interventions. If we consider all of the five counties currently in the wake of the looming Virus, the current total population endangered can be put at about 1,922,148 (including Montserrado, Bomi, Rivercess, Margibi Grand Bassa and Lofa Counties). This is almost half of our country’s total population, with a high risk of further escalation to more bordering counties if nothing better than current interventions is done.

If you ask me about what the state of our society will be within the next weeks, my answer will be “blood bath”. It will be more than how journalists describe serious battles, especially when two opposing forces are equally prepared to push back their opponents, either by defeat or extermination. The War against Ebola Virus in Liberia could become even worse than a “blood bath” or it could improve. This will be dependent on what mechanisms are been put in place right now, and whether our purpose is to curtail, endure or defeat.

It is not just me who thinks this way. Walking down the streets of Paynesville, the fear of Ebola has evoked uncertainty. Many are now recalling the worst period of the civil wars in Liberia and wondering if this is not going to be as bad. On 9th September, the UN Security Council’s regular briefing noted that Liberia is facing its greatest threat since its years-long conflict: “The speed and scale of the loss of lives, and the economic, social, political and security reverberations of the crisis, are affecting Liberia profoundly,” Special Representative of the Secretary-General, Karin Landgren, told the Council.

My assessment is based on recent visits to more than 10 communities in rural Montserrado and Grand Bassa counties. Views and comments from key stakeholders and citizens across these counties raise serious eyebrows and even more uncertainties. Based on these glaring facts, I would like to note that the result of whatever happens over the coming days – whether it is what the WHO says is going to happen or the US Center for Disease Control’s projections becoming real – will depend on what measures the government takes today.

Current reports show that the Virus is not scaling back. It is rapidly spreading, especially in Liberia. “The disease is spreading particularly quickly in Liberia, where WHO figures published Tuesday showed that more than 500 new cases were recorded in a week. The organization warned Monday that it expects thousands of new cases in the country in the coming weeks”.

In many parts of the counties visited, most of the citizens believe that there is a kind of disease been spoken about, but the majority are still cut off from the abilities to properly understand their roles in preventing the virus as well as the confidence to accept that this is a reality. Many people still live in denial and hopelessness, not only because they want to just ignore the reality, but because many of them don’t see the difference between this and acceptance from just living through the threats – the lack of coordinated response, coupled with misinformation and stigmatization, has complicated the likelihood of change.

Within this State of Emergency, a nearby village in Bensonville called Low Cost sees two suspected Ebola deaths reported. The Bentol Government Hospital was nearly closed during my visit on 6th September. As I drove and stopped by, only one midwife and nurse was on duty. I was told everybody has gone to Monrovia for weekend. It was the same in Careysburg Hospital. Both cities don’t have any mechanism in place to fight Ebola. In Careysburg, a private citizen, Benoni Urey, is supporting efforts. I met with a group of young people from Lower Careysburg (Gomoshu) who assembled at one popular entertainment center hoping that Mr. Urey would drive by. In Bentol City, unlike Careysburg, citizens will have to wait for God to come down! None of them, from Todee to Bentol to Careysburg, has a Task Force or local social mobilization mechanism or even any informed coordination with central authorities. In any case of a serious outbreak, a response will have to come from all the way from Monrovia.

In Grand Bassa County, during similar visits earlier, I saw a County Task Force hosted by the County Superintendent and supervised by a staff of the National Red Cross in Bassa. This Task Force has a Social Mobilization Committee, which was supposed to be the arm responsible for community sensitization and awareness-raising. On the contrary, due to a lack of proper coordination and sub-par approach, the Social Mobilization Committee is almost completely off-track from the main County Task Force. I saw members of the Committee brainstorming during one of my visits on how to raise funds within their individual organizations to carry out proposed interventions. Whilst at the level of the main Task Force, over 115,000.00 USD has been provided by the county caucus to be used by the Task Force to carry out its activities (including Social Mobilization). Arcelor Mittal Liberia, one of the leading companies in Grand Bassa, provided about $5000.00 USD to the same Task Force.

While talking with one of the County Health Officers, I learned that the volunteers recruited to carry out the removal and burial of suspected Ebola victims have almost all turned their back on their duties because of a lack of compensation and adequate logistics. The Ministry of Health is part of the Task Force but does not have a proper collection of how resources generated for the Task Force are used. One of my colleagues even told me that Grand Bassa is such a politically-charged county that, in times like this, politicians are not the right people to be in charge of resources administration.

In Rural Montserrado, most of the towns are still struggling to inform their inhabitants about the danger posed by Ebola. Most of them don’t even have the means to acquire the preventive resources, like sanitizing buckets and soap, and they remain unaware of what should be the first thing they could do in the wake of abrupt outbreak since there is no known local response mechanism that they can access except for a Task Force that is based in Monrovia. In Goyah’s town, for example, the villager has to walk to the town chief’s house to wash his hands to prevent Ebola because the chief is the only person who has a sanitizing bucket and is able to refill it with soap dust and chlorine.

At the national level, I am not sure how or what calculations were used in determining who forms a Task Force. However, every response to an Ebola case in Monrovia takes between 15 hours to three days. If you call the government’s hotline, you will be required to sit and wait for either a call or the arrival of a Task Force-marked vehicle. The National Task Force, as it stands, remains a Monrovia based Response Team. There is no countywide or community-level liaison or capacity to response in time. In some counties, you will only find a medical team for examination purposes and a burial team. No mechanism for prevention and social mobilization exists, not to mention contact tracing.

Five months into the epidemic, with the new WHO calculation of 20,000 potential Ebola cases expected in the region, Liberia’s health care expenditures have risen tremendously. According to the country’s finance minister, they account for 25 percent of the government’s annual budget instead of the eight percent projected earlier. The big question that many are asking is where is the money and what is it being spent on? From all indications, even with a said Task Force in place, it is not clear who is responsible for where, when and why money is spent. Almost all major key ministries and other functional entities in the country are said to be running their own individual Ebola campaigns with no significant mechanism to track effectiveness.

As a youth leader and social development advocate, I believe we all have a stake in this fight and that is why we must not draw back but stand tall and join the fight from different angles. I realize that by providing some awareness of the unspeakable realities and shortcomings and advancing good recommendations, I can help key stakeholders do their jobs differently.

We have to win this war and achieving this will depend on those responsible for major tasks, like key institutions at the helm of expenditures, regulation and coordination of operations (the National Ebola Task Force, call center at the General Services Agency and the Ministry of Health and Social Welfare, the Ministry of Finance, Internal Affairs), plans to deal with the “three desperate, most deadly weeks ahead”. We need to declare another emergency though I am not sure what it should be called. I foresee the government taking a monitoring role, leaving day-to-day operations and management of Ebola resources in the hands of trusted international agencies in consultation with the National Task Force, other medical experts and local technocrats divorced from political influence.

Thomas Barlue is a Young Peace Ambassador, One Young World Ambassador, Community Solutions Fellow and committed, grass root, youth and community development advocate. He has been working and inspiring change among and for children and youth since 2004. He can be contacted Via Email: onedream.lib@gmail.com/ Skype: one-dream.lib / Twitter: @teeman101. Story originally published on http://development4liberia.blogspot.co.uk/2014/09/Circumstances-for-Change.html