Sierra Leone: Always Resilient in the Face of Adversity

In the past several years, Sierra Leone has dealt with a civil war, the Ebola outbreak and then, in mid-September, heavy floods hit the capital, Freetown.

Remote areas were devastated. Four people died and thousands are displaced. Houses were destroyed, and property and furniture were wiped away, leaving many Sierra Leoneans homeless. All hope was pinned on the government, and flood victims were shifted to the national football stadium, which is now a temporary shelter for thousands of Sierra Leoneans.

In the midst of the Ebola recovery, as the country relives itself from the grip of the outbreak, Sierra Leoneans are once again in a state of despair and uncertainty; the country is in complete turmoil. 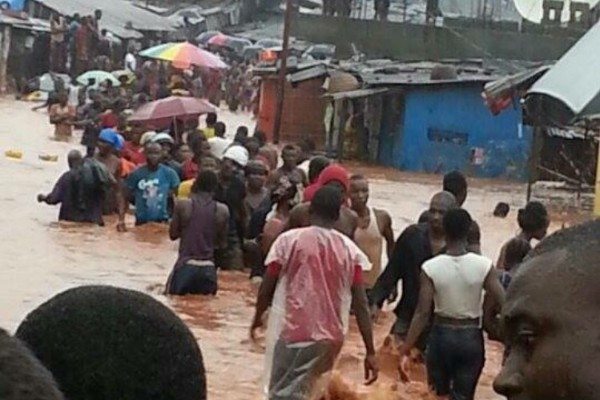 This feeling of displacement, the sense of homelessness and property being destroyed is not something new in Sierra Leone; it is a phenomenon that seems to repeat itself. In 1990, the country was engulfed with a brutal and prolonged civil war that raged for five years, leaving people traumatized, infrastructures destroyed and the government completely destabilized. Women were brutally raped, children were painfully murdered and boys were compelled to take arms against their loved ones.

As the country was facing such hardship and sinking into a deep nightmare, Sierra Loneans, with the help of the international community, came together as a nation in bringing peace into the country.

In the fight to bring the country back to its feet now, the people of Sierra Leone are together again, more resilient and stronger. They refuse to embrace this crisis as their reality. International support and individual donors have contributed massive supplies of food to victims at the national stadium. Politicians, who are often caught in ideological battles, are suddenly united, as all committed to helping the situation.

At the heart of rehabilitating the country are young people. They are doing everything in their capacity to help victims. In the wake of the floods, Ibrahim Fofana, 20 years old and a final year high school student, was among the first responders on the ground, saving children from drowning and offering assistance with food and clothing. He even accommodated some victims in his tiny apartment that he shares with his brother. Youth like Fofana add an incredible element to the narrative, and his work reflects the importance of youth involvement in community development.

The situation has now de-escalated; many victims have a place to call home. While the country tries to recover from this ordeal, and survivors are in the process of stabilizing their lives, families and communities have engaged in a journey to return the country to normalcy.

The people of Sierra Leone have faced many challenges but they have always bounced back, and in this case, they have demonstrated the resilience and strength to exert control over the situation by coming together as a nation.

Article contributed by Ousmane Ba. Originally from Guinea, Ousmane is currently an Economics and Political Science student at Columbia University in New York City, a Global Youth Ambassador for A World at School and is dedicated to fighting for education and youth empowerment. His other guest blogs for PCI include Youth Unemployment in Guinea.