Youth Unemployment in Europe: The NEETs

Youth unemployment in Europe and the continent’s NEET generation exist because of more than just economic causes. Valentina Locatelli tells us about her experience with and advice for the NEETs of Europe.

The acronym ‘NEET’ stands for ‘Not in Education, Employment or Training’ and defines those young people who are in a limbo where they don’t study anymore, don’t work yet and either can’t change or improve their situation or aren’t motivated to, as they feel good in their comfort zone.

The latter phenomenon is alarmingly increasing in Italy, where more and more young people abandon their studies early and don’t look for job, hiding themselves behind the high level of unemployment in the country.

According to a 2015 study by University of Milan, 2.4 million of young people aged 15 to 29 in Italy neither study nor work. Italy is the country in occidental Europe with the highest number of NEETs, according to the study, followed by Spain, the UK and France, where the number is also around 2 million. Only Bulgaria goes beyond the limit, holding 24.6% of all European NEETs. 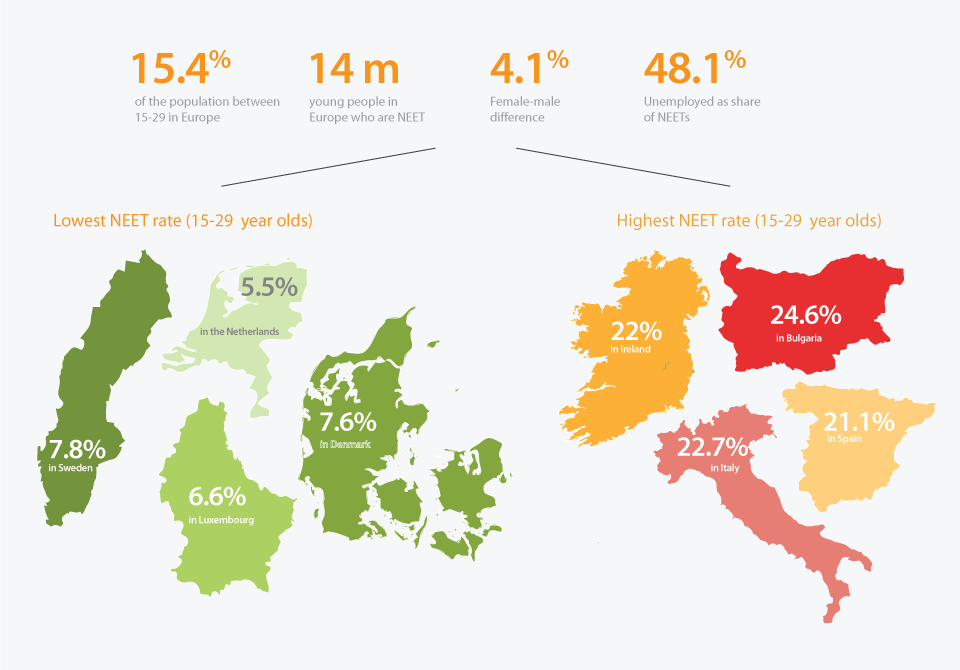 What makes me sad about this phenomenon is that even though we are in a period of crisis, there are plenty of opportunities for young Italian people to leave this stand-by situation and do something with their lives, such as Erasmus+ projects, the European Voluntary Service, Youth Exchanges and training courses.

There are also national programmes like Servizio Civile Nazionale (the Italian version of EVS), Leva Civica Regionale, Garanzia Giovani as well as endless volunteering opportunities and au pair and WWOOF experiences. But some young people just don’t seize them.

What does the life of an Italian NEET look like? I recently spent some days in the countryside of northern Italy and had a chance to observe the NEET life: I met some boys my age – I’m 22 – who finished high school some years ago and have been unemployed ever since.

It’s true there aren’t many job opportunities in their area, but I think the main problem is different – it’s a lack of lust for changing their lives. These young people are fine with the life they have.

Most of these boys live with their parents and their typical daily routine consists of getting up late, loafing about all day and going out with friends every night. For this life, they get a weekly tip from their parents otherwise they wouldn’t have money to go out.

One of them asked me for advice on job hunting, as I have worked more or less consistently since I was 18 to pay off my university studies. I gave him some websites and talked to him about Erasmus+ Projects. I gave him a sea of opportunities to seize. 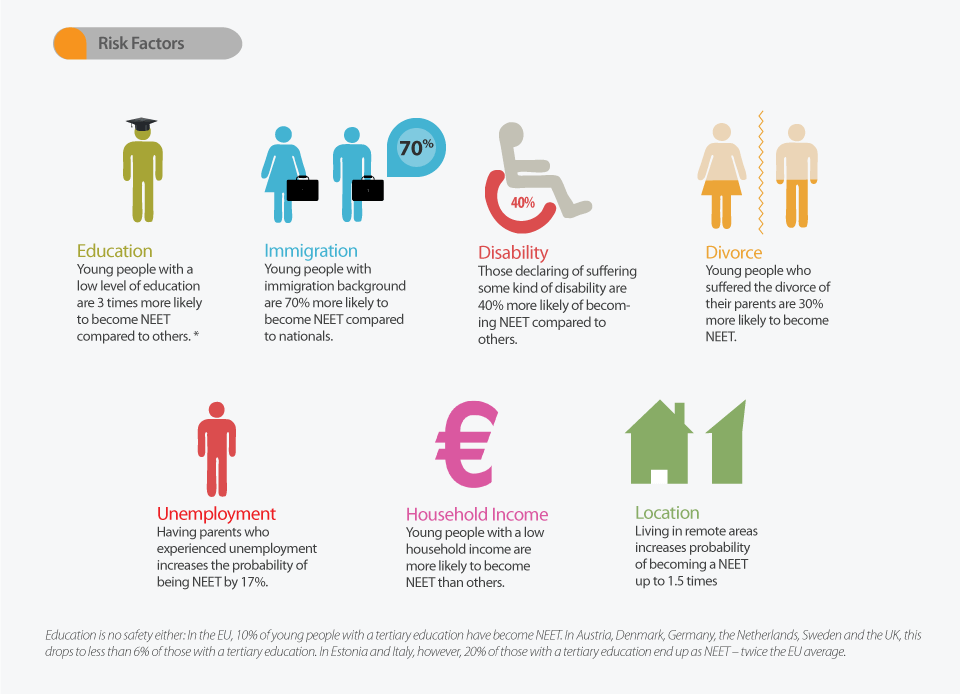 When someone doesn’t have any sort of job experience and doesn’t speak many foreign languages, it is hard to find the starting point, but it’s also true that all these opportunities are well-promoted, and every young person in Italy between the ages of 15 and 29 has an internet connection to go and find information.

What makes me worry isn’t those youngsters who don’t do anything because they don’t know about the opportunities offered by the EU and/or their own country – I feel pity for them and think we all should do something to inform our peers on what they could do and on the opportunities we have.

What truly makes me worry are those who, even knowing about the opportunities they have, don’t do anything about it because they are not motivated to go outside their comfort zone: as long as they have a place to stay, warm clothes, food to eat and a tip from their parents, not having worked one single day of their lives, they can’t find a reason why they should change their position, which is favourable to them.

I talked to these people about Erasmus+, explaining to them that you don’t need to be a university student to attend the programmes. I told them I was leaving for a training course soon, and they only made racist comments about the country to which I will be going.

It made me realise the impact of the social environment in which someone grows up; how important it is to travel, to face difficulties and to become independent; how important youth exchanges and similar kinds of experiences are.

What impressed me the most is being 22, exactly like those boys, but realising how differently we all view life. I realised how important it is to involve people from rural areas and socially-excluded environments in EU projects – to let them travel, discover new places, new cultures, new languages; to let them learn and enlarge their horizons.

Travel is the key, but another huge stereotype that gets in the way is the belief that traveling costs a lot of money, which actually isn’t true.

These young people keep complaining that there are no job opportunities, but I had a recent experience working in Human Resources and had to cope with dozens of last minute job interview cancellations and with many candidates who never even showed up: a whole portion of the lost generation that never tries to change their routine.

Article submitted by Valentina Locatelli, a 22 year-old international affairs student currently working in fundraising for an Italian international cooperation NGO. She spent last summer in Gaziantep, Turkey as an EVS volunteer. Follow her on Twitter @v__locatelli and read her other PCI guest blog, How to Promote Tolerance: Valentina’s Story and A Sharing Economy Example.