How Many Haiyans Will it Take to Change Policy? 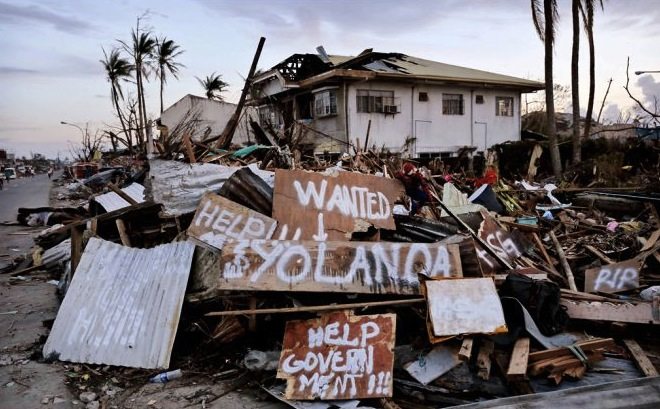 COP19, the UN sponsored conference on climate change, is currently underway in Poland. The basic idea is that for 2 weeks high ranking officials, drawn from the 4 corners of the planet, will collaborate on finding solutions to global warming. While this collaborative ethos is all well and good in theory, in practice the good name of collaboration is besmirched by self-interest, politics and intransigence. Although a widespread consensus has emerged – founded on hard scientific data – that global warming is a man-made phenomenon, there still remains a marked reluctance in policy making circles to take climate change seriously and draft appropriate legislation. The recent move by Australia’s newly elected Prime Minister to repeal the country’s Carbon Tax is a regressive step that highlights where climate change ranks in the Liberal Party’s long list of priorities. Bear in mind that Australia has just suffered terribly from widespread bushfires that ravaged many communities unlucky enough to lie in their path. The Prime Minister himself was among those fighting the wind whipped walls of fire, so he cannot claim ignorance as to the destruction they wrought.

Another first world country making all the wrong noises is Canada. The Canadian government has applauded Australia’s intention to repeal their Carbon Tax and has vociferously rejected the EU’s labelling of tar-sands as a “dirty fuel”. The mining of these tar-sands is largely responsible for Canada falling behind in meeting their own Climate Change Commitments. Although no longer bound by that pesky Kyoto Protocol, from which Canada withdrew in 2011, they stand to significantly overshoot their own targets. These targets – part of an American emission reduction pact – state that by 2020 Canada will have reduced their emissions levels to 17% below 2005 levels. At present it is projected that they will have achieved only a 3% cut.

Australia and Canada are two of the world’s worst polluting countries per head of population. Both of their economies are heavily reliant on resource extraction, their picturesque landscapes now taking on a gorgonzola like quality – so pockmarked are they by mines. The obvious affluence of cities studded with jewel like skyscrapers hides the hidden cost of the voracious pursuit of money. Natural treasures such as the Great Barrier Reef and large tracts of previously pristine Canadian wilderness are coming under increasing threat from extraction related pollutants. The erosion of their grandeur however is a gradual process; one that can be all too easily dismissed as insignificant – until it is too late that is.

Something that was neither slow nor gradual was Typhoon Haiyan – its impacts were immediate and sent reverberations around the globe – the terrible images of mass destruction are front page news around the world – the scandalously slow relief effort, an international disgrace. With increased global warming such extreme weather events are likely to become ever more frequent, likely to bring greater economic penalties and likely to result in more and more people being left bereft at the loss of their homes and family members.

Sadly for mankind the slow ebb of destruction fails to resonate or capture the public’s consciousness in the same way as a headline grabbing catastrophe. The global financial crisis has put global warming on a policy back burner – at COP19 nearly 30% of countries will not be represented by a minister. Will it take future Typhoon Haiyans to redress the balance and see the climate change agenda once more propelled to its rightful position as the chief concern for global policy makers?