The ‘Best Practices in Teaching Entrepreneurship and Creating Entrepreneurial Ecosystems in Europe’ project – part of the Erasmus+ programme – held its third international meeting in Malta in May 2015. A total of nine representatives from this project’s four partner institutions attended meetings with twelve different organisations, all of which are involved in teaching and/or supporting entrepreneurship in Malta. Some of the meetings were held at the University of Malta’s TAKEOFF Business Incubator, while others were held at the premises of the respective organisations. 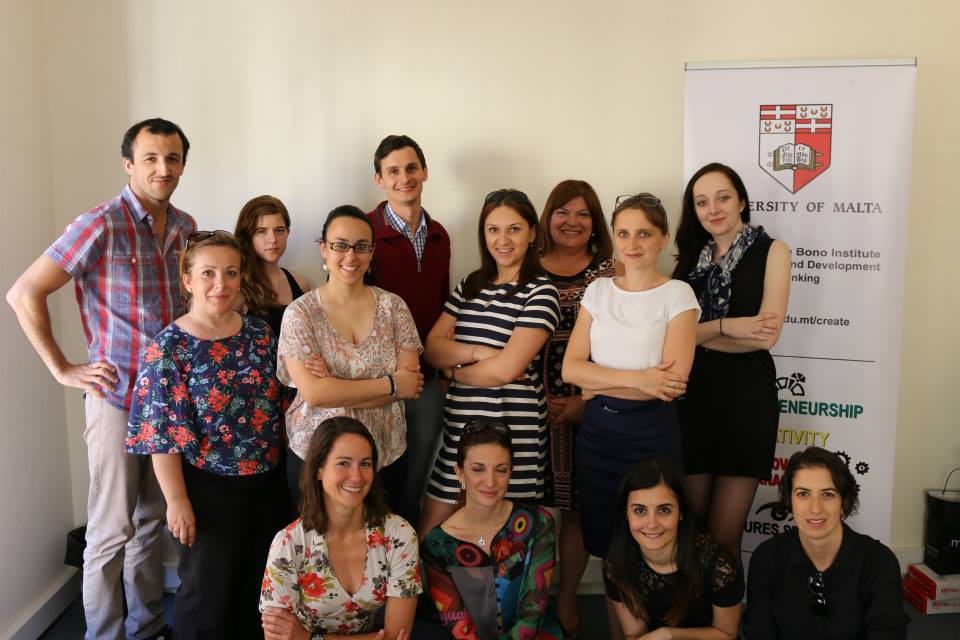 The partners from Poland (Global Entrepreneurship Week Poland and Youth Business International) and the UK (Peace Child International) arrived in Malta on Monday 11th May. That evening, they met the hosts of this meeting (The Edward de Bono Institute) for an introductory meeting where they discussed the agenda for the next three days.

On Tuesday 12th May, the partners held meetings with five organisations. In the morning, they visited the Malta Information Technology Agency’s Innovation Hub in Kalkara. The next three meetings were held at the University of Malta, where they met with the Director of Corporate Research and Knowledge Transfer, the Director of the Centre of Entrepreneurship and Business Incubation, and the CEO of a youth NGO called Young Business Entrepreneurs.

In the afternoon, the partners went to Sliema for a meeting with the CEO and Programme Coordinator of Junior Achievement Young Enterprise (Malta). This meeting was followed by a cultural activity, where the partners boarded a boat and enjoyed a guided tour of Malta’s Grand Harbour and Marsamxetto Harbour, including a detailed commentary of the history of Malta. In the evening, the partners attended the launch party of a contemporary jewellery exhibition of one of Malta’s top jewellery designers.

On Wednesday 13th May, the partners visited St Paul’s Missionary College in Rabat to observe an entrepreneurship lesson with a group of teenagers. They then went to the University of Malta for meetings with representatives of six organisations. These were a meeting with a member of the Entrepreneurship Committee of St. Nicholas College, the AIESEC Malta’s Head of Incoming Global Talent and Business Relations, the Executive Coordinator of the Foundation for Women Entrepreneurs, the President of the Malta Association of Women in Business, the National President of Junior Chamber International, and the President and Academic Coordinator of the University’s ICT Students Association.

In a concluding meeting on Wednesday evening, the partners discussed the requirements and standards for this project’s publication.

What the participants say:

“In Malta, we saw a wealth of entrepreneurial initiatives. The University of Malta provided an excellent environment in which to learn about these schemes, and our partners’ connections allowed us to witness the entire entrepreneurial progression – from an Introduction to Entrepreneurship class for teens to a jewellery entrepreneur’s launch party. We left Malta with new ideas, new contacts and a solid understanding of its entrepreneurial ecosystem”.

Article by Dr Leonie Baldacchino, Director of Edward de Bono Institute for the Design and Development of Thinking