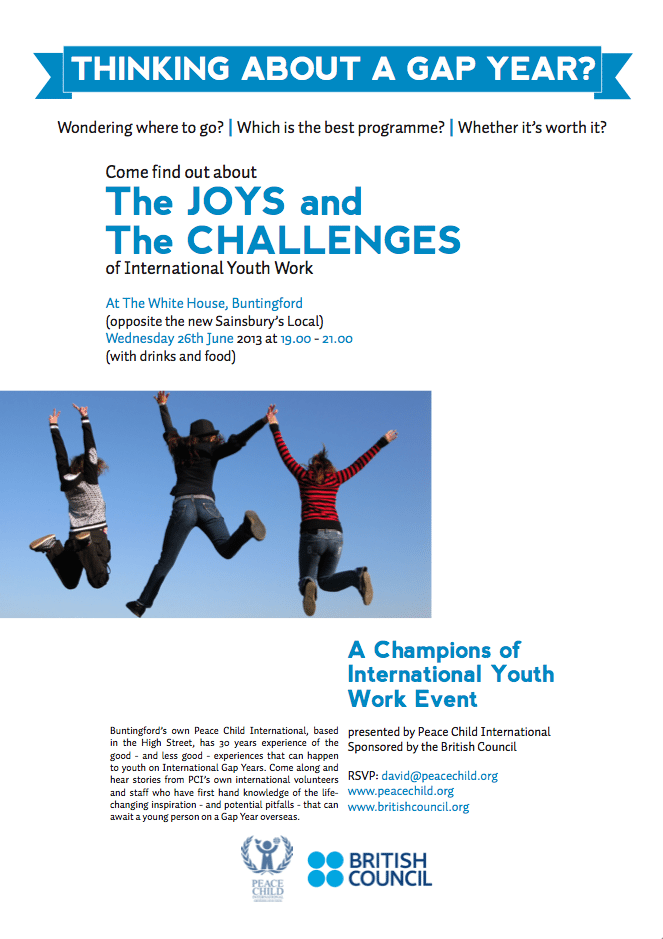 On June 26th, Peace Child International held a gap year talk at The White House (Buntingford). Subjects such as gap year opportunities, Youth In Action, personal experiences of gap years/travelling and many similar subjects were covered.  As well as this, a variation of videos were shown; including ‘50th anniversary peace corps video’ and ‘PCI: Scotland world youth congress introduction’.

During the talk, a database of gap years was handed out to everyone. Within the database were gap year organisations, along with an assortment of different things that you could do, places that you could see and the prices to go with them.

A group discussion about the topics covered followed on from the gap year database presentation. Within this discussion, people put forward their opinions on gap years and debated whether they’re a good thing or a bad thing. Also, more gap year experiences were shared in addition to the kinds of things people would look into doing if they were to take a gap year.

Prior to the group discussion, everyone who came to the talk completed a survey that they started before the presentation. The questions were:

When given a question, the survey participants were instructed to mark their answer to each question on a scale of 1-6. 1 being very low, 6 being very high. The questions were asked before the talk, and after the talk.

When the answers to the survey were collated, it was evident that the talk had improved people’s awareness of the benefits of international youth work and understanding of the Youth In Action programme. The talk had also raised people’s aspirations to take a gap year. Along with a positive collation within the survey, everyone who was present gave positive feedback upon leaving.

This report was written by Alisha Fraser a student from Freeman College who volunteered with PCI and was instrumental in both organising and following up on the Gap Year talk. Thanks Alisha!