Representatives of four institutions from Poland, Malta and the United Kingdom met at their first international project meeting in Poland. Peace Child International, The Edward de Bono Institute from the University of Malta, Youth Business Poland and Global Entrepreneurship Week Poland Foundation launched their first common project within the Erasmus Plus program, funded by the European Commission. The project, called “Best practices in teaching entrepreneurship and creating entrepreneurial ecosystems in Europe”, will end in September. 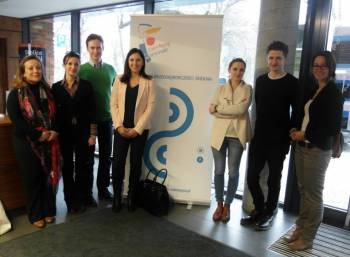 During a 3-day meeting, partners got to know each other and discussed projects and activities related to entrepreneurship that they carry out in their countries. They also discussed the Erasmus Plus project’s timeframe, responsibilities of all parties and next steps which need to be taken in the upcoming months. On the second day of the meeting, the participants visited the Smolna Centre for Entrepreneurship, the Academic Incubators and Business Link office in Zebra Tower in Warsaw.

The Smolna Centre for Entrepreneurship was developed by and is maintained by the City of Warsaw. It hosts an incubator with 40 workplaces designed for nascent entrepreneurs who have been running their business for less than three years. Smolna is also a place where citizens can ask for advice regarding the European Union and EU funds from the Europe Direct information centre and even register their own company.

The Academic Incubators (AIP) is the biggest network of its kind in Poland and one of the biggest in Europe. Partners had the chance to talk to Michał Misztal, AIP Mazovia regional manager, who talked about how incubators are expanding in Poland.

On the third day of the meeting, participants met with Paulina Lichota Zadura, director of the Polish Agency for Enterprise Development. The Agency is one of the biggest and most important public institutions which promotes and supports entrepreneurship in the country. It is also an intermediate body which transfers all EU funds to Polish enterprises, helping them to grow and become more innovative.

The second half of the day was dedicated to promoting entrepreneurship among children and youth. The team first had the opportunity to talk to Andrzej Ciastoń, an entrepreneur, project manager and educator. His organization created several creative tools which were used to teach entrepreneurship at schools, among them a video series and a cartoon.

The partners had also the opportunity to participate in the “Entrepreneurial school” finals, led by the GEW Poland Foundation. The Entrepreneurial School is a competition designed for high school students who submit their creative ideas on how to teach entrepreneurship in schools. The best team wins up to 5000PLN (around 1200 EUR) to make their project come true. During the finals at the Warsaw Stock Exchange, project partners could listen to the Ministry of Education representative, meet the team who won the competition and discuss how to improve teaching entrepreneurship with Polish teachers, students, government and NGO representatives and entrepreneurs themselves.

What the participants say:

“I came away from Warsaw Informed and encouraged. The vision of the Polish Agency for Enterprise Development, the creativity of Poland’s entrepreneurs and the commitment of its young people to enacting social change was inspiring. It was an organised, engaging, well-rounded experience outlining the idea of a holistic approach to entrepreneurship, evidenced by examples of forward-thinking best practice”.
Robbie Noble – Media Strategist, Peace Child International