Young entrepreneurs in the Middle East are part of a new wave of self-employment sweeping the nation, and Mostafa Shahat writes about them.

Lebanon is one of the most religiously diverse North African countries, and it has a unique culture that makes it one of the top destinations in the Middle East for tourists. Lebanon’s community is one of the most open-minded and modern communities in the region – it respects women’s rights, and is not ruled by a specific religion.

Despite many political and economic challenges in Lebanon, it is one of the very few countries in the region that was not affected by Arab spring in 2011.

There are many activists, community leaders and entrepreneurs who positively shaped Lebanon’s community, and there are many social enterprises that launched in Lebanon and now operate in each Middle Eastern country.

Nibal Farashe is one of the few women and children’s rights activists in Lebanon who started working at very early age with the civic organisations in rural areas to empower women and children and provide ongoing educational programmes.

Nibal studied Law and Political Science at Beirut Arab University in 2015. Since she was 14 years old, she volunteered with World Vision, where she was organizing leadership camps for underprivileged children in rural areas. In these camps, children learned many different social skills as well as their role as citizens and their rights and duties.

Nibal was part of World Vision for more than seven years. She was not only providing entertaining and educational activities for the children, but also conducting evaluations and assessments for other world vision projects.

‘World Vision empowered myself confidence and independence, and I feel that my role in the community is important and my contribution and efforts matter’, says Nibal.

Nibal also volunteered at UNDP for almost three years. She was responsible for children and youth educational and development programmes and some environmental projects. 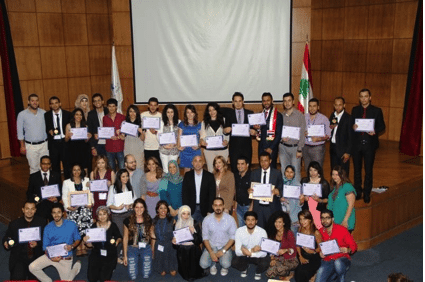 After graduation, Nibal served in many international NGOs. She worked as a Caritas Legal Consultant at the UNHCR registration center, a Human Rights trainer at Shield and an Educator at AVSI, where she worked on developing programmes to empower children through different educational activities. She also worked as a Social Worker at InterSoS.

Nibal attended the fourth regional summer course on ‘The Implementation of Human Rights Conventions in the National Systems’ at the Human Rights Center at Beirut Arab University in Lebanon. She attended several trainings and workshops about human rights topics with participants from many Arab countries.

‘Volunteerism plants the seed of change in my soul’, says Nibal. ‘That’s why I want each person to live the same experiences to become empowered and inspired by so many role models, and believe in themselves, trust their abilities and understand deeply that their role always matters’.

Nibal is using all her previous experiences to launch a new social enterprise that provides trainings programmes for youth, children and women, and it will be based on volunteering. Nibal believes in her capabilities and skills, and she will do her best to spread her success story among other Lebanese’s women who have experienced the same struggles as Nibal.