Ayman Saeed is one of the few who actively affected Egypt’s entrepreneurship ecosystem through his efforts. Ayman studied Electrical Engineering at Ain Shams University in 2005, obtained his MBA and specialised in marketing at the Arab Academy for Science, Technology & Maritime Transport. Ayman’s favourite quote is, ‘Wisdom is to know what to do, knowledge is to know how to do and success is to do’’.

In 2011, Ayman joined as a volunteer and ended up as a board member at the Middle East Council for Small Business & Entrepreneurship (MCSBE), where he has organised and conducted several successful entrepreneurship programs and competitions.

Along with his team, Ayman organised the Cairo Startup Cup competition, funded by USAID Egypt, which gathered 52 groups of entrepreneurs for six months to attend trainings and pitch their businesses for funding opportunities.

In 2013, MCSBE organised Bedaya Startup Academy, which is another six-month entrepreneurship training and mentorship for 25 groups of entrepreneurs, funded by the Ministry of Investment and USAID. During the same year, they organised a solvers’ camp, where they invite 30 entrepreneur who are interested in one of three main themes: education, energy and agriculture. The idea behind the camp is to find creative and sustainable solutions to the problems in the chosen themes.

Before Ayman left MCSBE, he helped in organising the international co-working space camp at El-Guona, which gathered 40 entrepreneurs from Egypt, Lebanon, Germany and Austria. The main aim of the camp is to connect founders of co-working spaces with each other and share experiences and ideas about how to develop the services.

Ayman and two other writers, Mahmoud Wasfy and Mahinaz El-Aasser, have published one of the very few books that gives a clear overview about the entrepreneurship scene in Egypt as well the major players in the field and successful entrepreneurs in Egypt. Named Entrepreneurship in Egypt: from Evolution to Revolution, 1,000 copies of the book have been sold so far. 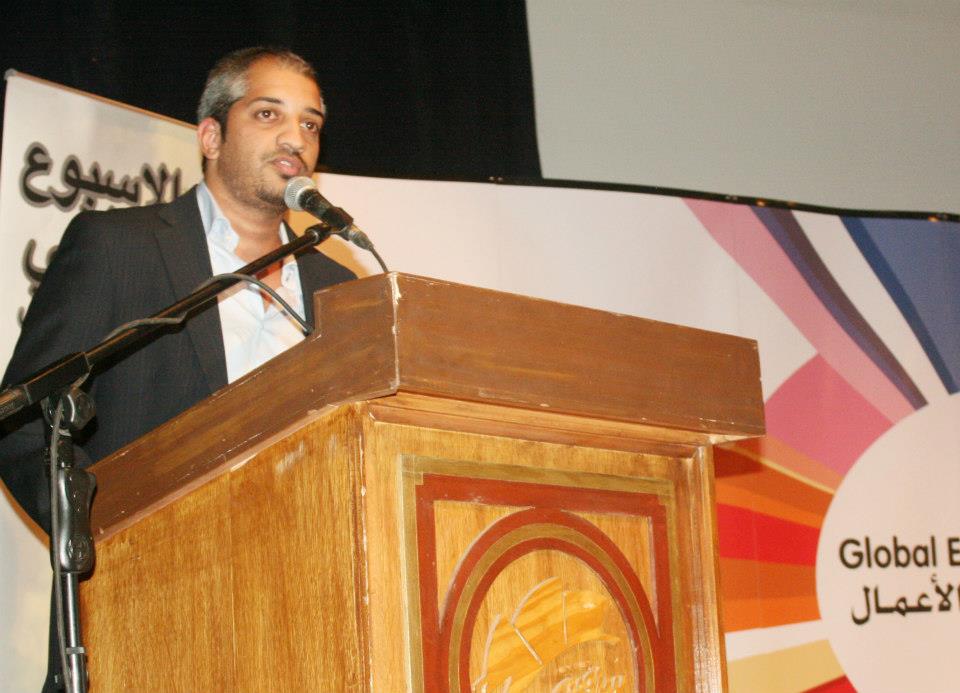 Ayman has recently founded Startology, which is a social enterprise enables Egyptian youth to start up and sustain their businesses. It offers mentorship and training to entrepreneurs, and it joined the Zizinia National Creative Challenge as mentor and judge to more than 120 groups of entrepreneurs.

Startology also offered mentorship and training about business modeling, marketing, customer discovery and finance during the first cycle of the accelerator programme, Imagine Cup Academy, powered by the Germany University in Cairo.

In 2013, Ayman was invited during Global Entrepreneurship Week to speak about the entrepreneurship scene in Egypt, and he was awarded a scholarship to attend the Malaysian Technology and Development Commercialization conferencein 2014.