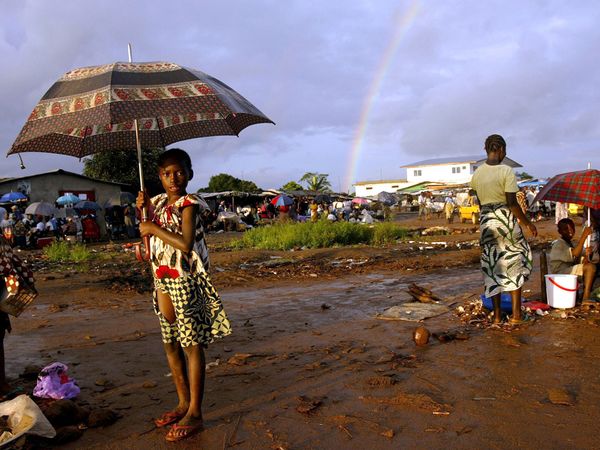 Our international intern Fred Fenwick at the Be The Change Academy in Paynesville, Liberia shares his thoughts, observations and knowledge about the impending rainy season.

As a person who grew up in Britain, you would expect me to be accustomed to wet weather. Yet Britain is nothing compared to the annual rainy season here in Liberia. In the five months that I have been here, there has barely been a drop of rain, but I’ve been told to expect a constant downpour for the next four to six months. Liberia’s annual rainy season is something everyone here must endure. It seems their hardships are far greater due to the complete lack of public transportation or covered community areas. Simply, they are going to get very wet very often.

My job in Liberia is an entrepreneurial trainer for the Be the Change Academy, so I was wondering what effects the dry and wet seasons would have on on Liberian businesses. In terms of the Be the Change Academy, there is a fear of an increased dropout rate due to the changing weather, which makes it difficult for people to travel to our training sites. I hope this doesn’t happen, but it did get me thinking – I began to question the women I train how the changing of seasons affects them personally and in terms of their businesses.

Personally, the women in my programme say they very much dislike the rainy season because it causes illnesses such as colds and flus. Everyone complains that the temperature is far too cold, falling to a crazy low of around 24 C. As a British person, this made me laugh. It seems no matter where in the world you are, people can always complain about the weather.

But what does the rainy season mean for these women’s businesses? The short answer is, the businesses will suffer. The women have informed me that during the dry season ‘anything goes’, meaning you can make money from selling most types of products. This changes during the rainy season, during which only specific types of business will make you ‘good money’ – another phrase I have picked up from my trainees.

A good business strategy for selling during the rainy season is to bring the goods to the customers, so people move around the communities with the goods on their heads, which is called a ‘top’ here. Because most people will not leave their houses during the height of the rain, this selling method applies to all sorts of businesses. It seems most profitable, however, for those people selling food. For no matter what the weather conditions, everyone must eat.

I have identified two types of business that seem to boom during the rainy season: the first is businesses that relate to the change in weather and the effects of the rain, such as umbrellas, rain jackets and rain boots (‘Wellington boots’ to me). This seems like a good option for seasonal business people, as they can supply what people demand.

The second is those business that have their supply restricted due to the weather. The road network, which is the only method of transportation in this country, already leaves a lot to be desired, but it only becomes worse in the rain. Goods such as charcoal – a staple of every household in Paynesville – are much harder to supply in poor weather since they require transport. All charcoal, for example, is produced in the rural areas and brought to the city. Meanwhile, red oil, which is the base for most of the food cooked in Liberia, faces a different issue. Red oil to Liberia is what olive oil is to Italy. It is produced by tapping palm trees and draining the oil from within. During the rainy season, however, there is no tapping of palm trees. Thus, again, there is a shortage of supply. Because these goods have a lack of supply during the rainy season, businesses can hike up the prices. For example, a bag of coal in the dry season will cost you 325 Liberian dollars (lrd), but in the rainy season, it will cost 400 lrd.

For businesses in Liberia, there are both opportunities and challenges to face during the rainy season. But people who are creative, innovative and entrepreneurial can make successful and profitable businesses no matter what the weather. For me, I just hope that I can still seem some sun in the coming months and that my trainees continue to attend our classes.